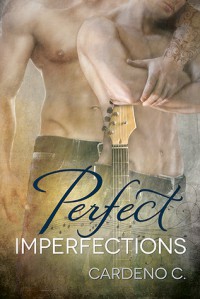 First of all, that cover is gorgeous!!! And the book itself is fluffy, romantic, cute, and completely angst-free. Loved it!

Jeremy Jameson aka JJ is a 31 year old talented and handsome rock-star. He was basically born famous, because his grandfather, mother and father all work(ed) in the industry, and he's been in the spotlight ever since he started his career as a musician. To most people, he is The Jeremy Jameson, which means everyone has expectations of him. His team feeds him lines for the press, his personal life is not private, he's harassed by photographers and interviewers. The only relationships he ever had have been with women who clung to him for ulterior motives, so he's lonely.

Reggie Moore aka Reg is 26 years old, and he works in a small town as a bartender, after having figured that being an accountant wasn't for him. His dream is to travel the world. Reg is kind, easy-going, funny, and always on the lookout for the next adventure. So, when Jeremy stumbles in the bar and offers to take him on tour, Reggie accepts. He's always patient with Jeremy, and the superstar's temper tantrums and hissy fits don't deter him. What's more, he doesn't see Jeremy's craving to be touched as a weakness.

Their deal is for Reg to be Jeremy's pretend boyfriend, so they go from that to best friends, eventually taking their relationship further and falling in love. Jeremy is doing his rock-star thing, and Reg is there at the end of the day to offer comfort, to take care of him, and he also takes on a role as Jeremy's protector. They complete each other perfectly, and I ate up the GFY aspect of the story with a spoon, because it was done right. Also, JJ & Reg take a lot of time to get together, but when they do, it's hot and dirty, and so worth the wait! ;-)