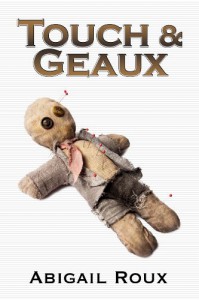 The further I get into this series, the more I ask myself these things: Will this book be even better than the last? Will Abigail Roux manage to blow me away again? Can I fall deeper in love with Ty & Zane? And the answer to those questions is yes. Every single time.

Touch & Geaux was one hell of a ride! Brutal, but brilliant.

Warning: This review contains a lot of quotes. Major spoilers are hidden.

This story begins with Ty & Zane working in Baltimore, doing paperwork once again. Due to the fact that their faces have been all over the news while working a previous case, they are not allowed to go undercover. What's more, their superior, Dan McCoy, orders them to participate in a fundraising calendar, as models, of course. Oh, how I wish I could get my hands on one of those damn calendars! Now, the photo-shoot was very funny.

Ty looked down at his suit, his favorite Tom Ford suit, and visibly balked at the mention of getting it dirty. "Maybe you could put us in civvies and have us undercover," he suggested as he smoothed a protective hand over his lapel.
Susan gasped and grabbed his arm. "Under covers!"
"No. What? No!" Ty blurted.
"That's brilliant!" Cynthia exclaimed.
Zane felt a real flash of panic. "I really don't think–"
"Oh, I like this even more than the motorcycle!"
"He'll do the motorcycle," Ty tried, but they weren't hearing him. plenty of angst, secrets, lies, heartache, anger, betrayal and some scary-ass hoodoo shit (big no-no for poor, superstitious Ty). It was an emotional roller-coaster. Ty & Zane went through a lot, had to question each other when secrets were revealed and struggled to save their relationship through it all.

No matter how much I love the man, I wanted to kill Zane quite a few times throughout the book! I understood him, I knew he had the right to be angry and lash out, but he threw a lot of unnecessary punches. When he called Ty a coward, I wanted to murder him! He knew how much that had previously hurt Ty, for fuck's sake! Also, that angry sex scene pissed me off to no end. Ty allowed Zane to just use him and it broke my heart! There were so many things that were said between them, especially coming from Zane, that just broke my heart a million times. Oh my God, this one just killed me... particularly because Zane acted like a major asshole and just threw the anchor token away like it was nothing!

"You told me one time that ... I was your compass. I gave you direction when you were lost," Ty said, nearly choking on the words. He glanced up, eyes reflecting like liquid in the low light. "Well, you were my anchor. You were something solid for me to hold onto. I wanted you to remember that."

Now, on to happier things... Team Sidewinder is back. And they're kicking ass! I just adore these guys! I loved the dynamic of the group, watching them work together and protect one another. They were also hilarious...

“It’s the cavalry,” Digger said.
“Thank Christ,” Kelly grumbled. He raised his hands, rubbing at one wrist and dropping his handcuffs to the floor.
“What the hell, man?” Nick whispered.
“What? They were too tight.”
Digger dropped his cuffs to the floor with a clank that echoed through the station. “If he’s not wearing his, neither am I.”

Ty slapped Owen on the arm. "Close your eyes, man."
"Why?"
"You got a tell."
"I have a tell at Rock, Paper, Scissors?"
Ty and Nick both nodded.
"And you tell me ten years later? You're both assholes!"

“You’re asking us to think like Ty?” Owen snorted. “I don’t think that’s possible; my brain isn’t powered by squirrels on treadmills.”

Liam Bell... What a character. I know I was supposed to hate the guy, but truth be told, I quite liked him. He was charismatic, sarcastic, bad-ass and funny, too. Okay, okay, I hated him for what he did to Ty and he was a major asshole, indeed. Better?

The ending was unexpected and bittersweet. That kiss was incredible and I don't think I'll get over it anytime soon! *sigh*

"Who are you, Ty?"
Ty smiled against his cheek. "I was an assassin," he whispered. "I'm a Marine. I'm the man who doesn't miss. And I'm yours."
Zane bit his lip on a smile.
"Who are you, Zane?"
Zane cocked his head. "I'm an artist. I'm a geek." He felt Ty smile. "I am one badass motherfucker on a motorcycle."
Ty began to laugh.
Zane dipped his head until they were staring into each other's eyes. "And I'm yours."

Oh, one more thing... There were two sex scenes which particularly stood out. The shower scene and the couch scene at the end! Scorching HOT!