Public Display of Everything 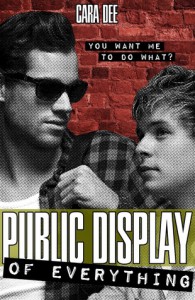 In a nutshell, Public Display of Everything is all fluff, with a dash of kinky awesomeness.

When I first read the blurb, I thought 'Oh. Exhibitionism/voyeurism?! Hell yeah, sign me up for that.' But what I got from this fantastic book was much more than that. It is a sweet story about two quirky guys, who overcome their issues together.

Cory is 30 and he's an American, who's been living in London for about 7 years. He's a major klutz, and even though he studied history and is pretty smart, he changes jobs all the time. Well, he also gets fired quite often.

Flynn is 22, and after moving to London, he created a website called 'Public Display of More'. The name speaks for itself. Problem is, his viewers want him to put on a show for them, and he can't do that.

One day, Cory is complaining to Tammy, his best friend–whom I really liked, by the way–about yet another lost job. Flynn overhears, and he offers Cory a job, specifically to impersonate him and jerk off for his site.

The rest, as they say, is history. Cory & Flynn quickly develop a friendship, soon after go headfirst into a relationship, and I mean things happened fast, but I didn't mind. It somehow worked. In the process, they discuss their pasts, and manage to overcome their problems.

I liked the back-story with Cory and Luke. While I must admit that I thought Luke was an asshole, judging by his messages at the beginning of each chapter, I was surprised by his role in Cory's life. I had a whole other theory, but the outcome was so much better than what I expected, and I forgave the guy, too.

All in all, this was a spoonful of sugar, and it put a big smile on my face! :)

P.S. I'm sorry, Eva, but I had to kinda steal your GIF or a similar version of it...