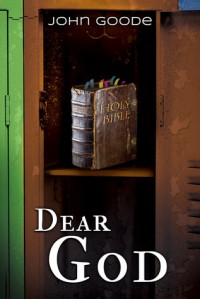 "Because a lot of people see what they want to see in that book [Bible]. It's why it is still followed thousands of years later, because it can be interpreted literally thousands of different ways. There are more than a few different branches of religion out there just based on disagreeing with what it means."

Now, here's why it affected me on a personal level...

I grew up in a so-called Christian family–I use that term loosely, because what went on behind closed doors was another story altogether. So, we dressed up nicely, went to church every Sunday, and were taught to lead a life as close to the one Jesus lead as we could. The Bible was sacred and everything in that book was a fact which you were not supposed to question. I went along with all of this until I was old enough to realize what was going on, and that I was basically being brainwashed by my family and fed some beliefs which were in no way my own. I then stopped being a good little soldier, didn't go to church anymore, didn't want to hear about religion and much less God.

I guess what I'm trying to say is that, because of personal reasons, I do not like the subject religion/God, since it makes me angry and triggers a lot of not-so-great memories. But this story, this is exactly what God should be about, what I wish he would have been to me when I was younger–love.

"Look, Kyle, God is about love and he is about forgiveness. He is our father, not our jailer. [...]"

I also wish people who supposedly had faith in God and read the Bible would open their eyes a little more and understand that being gay is not a sin, that gay people have just as much of a right to go to heaven as straight people do. Ultimately, isn't it just love? Straight, gay, bi etc., it doesn't make a difference, it's love! So, why is that such a deadly sin?

"Why does God hate gay people?"
Father Mulligan didn't even hesitate. "He doesn't. Next question?"