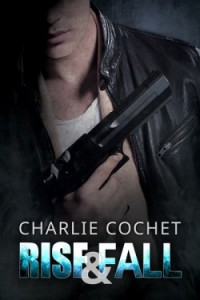 The moment I picked Rise & Fall up, I was lost to the world–that is, the real world. And I mean completely absent, living entirely in the book. Anyone unfortunate enough who tried to pull me out of the book's world got nothing but growls–Felid behavior must have rubbed off on me–and dirty looks for their efforts. I did nothing but read for hours, that's how mesmerized I was. The fourth installment is, without a doubt, the best of the THIRDS series so far! AMAZING!!!

Warning: The next part of the review contains spoilers and is basically one big fangirl *squee*. :)

If you're looking for a thorough review of the book, this won't be it. Here are some highlights/my favorite parts:

→ Dex. I really liked seeing this whole other side of him, the man who fought with all he had to protect his family. Granted, I didn't approve of his keeping secrets from Sloane, but I understood his reasoning.

→ Sloane. He finally came to terms with his feelings for Dex, and it was lovely!

"I don't want Ash, goddammit. I want you! I fucking love you!

Also!!! Sloane marked Dex! Now, if that doesn't scream utter devotion, love, and trust, I don't know what does... *sigh*

He'd never done anything like this before. His Human side desired Dex. His Therian side wanted to claim him.

→ Ash & Cael. I thought these two would be the death of me! Two guys in love, and still, all they did was hurt each other. And OMG, Ash made me melt like butter!

"He's fucking gorgeous. I can't believe I'm saying that about another dude, but fuck me, he's beautiful. His eyes are amazing. These really pale silvery pools–pools, Sloane! I'm calling his eyes fucking pools. Just seeing him makes me smile. He's funny, sweet, damn sexy, and I don't know why the hell he fell in love with me. No clue."

But then they had that epic Hollywood movie kiss, and I was grinning like a fool.

→ Calvin & Hobbs. These two are so adorable, I can barely deal with it sometimes. And Oh. My. God. Them getting off in front of Dex just about did me in!!! Hello, voyeurism kink! ;-)

→ Hobbs. He talked! He talked to Dex, and he's such a sweetheart!

"Hey, thank you."
Ash wrinkled his muzzle before looking away, as if he was thinking. Then he turned his head and snuggled Dex's face, giving his chin a lick.
"Ew, gross," Dex laughed. "Don't worry, big guy. It'll be our secret. No one would believe me anyway." Dex petted Ash before getting up and closing the door behind him.

→ Tony. The last scene was HILARIOUS! Maddock with Old Betsy going to have a serious don't-you-fuckers-dare-hurt-my-boys talk with Sloane & Ash. Just... Priceless!